There’s no hotter subject in the food industry than alternative proteins. In the last decade, America has seen an intense increase in demand for plant-based protein. Whether people are deciding to pursue a vegan or vegetarian diet or they wish to just limit their intake of meat, plant-based proteins are becoming increasingly popular.

What Does Plant-Based Even Mean?

Eating a more plant-based diet simply means being more minimalistic about what someone eats and where they are getting their meals from. Registered Dietitian, Tracy Lockwood Beckerman explains plant-based eating as, “focusing on minimally-processed fruits, vegetables, whole grains, legumes, nuts and seeds, herbs, and spices.” Unlike veganism which is avoiding all products from animals, a plant-based diet doesn’t have the stigma of how much of one thing you need to eat to be considered to have a plant-based lifestyle or diet. “It focuses on what you include, rather what you exclude.”

Why is Animal Protein Harmful?

It also uses a ton of fresh water as well as being the number one cause of deforestation in the Amazon. The supply chain of animal protein is fragile and extremely susceptible to destruction which leaves not only the animals, but also the humans who work and live on these farms at risk. A recent example being Covid-19 plaguing meat packing facilities across the country.

Scientists at EcoWatch explained how avoiding meat and dairy products is one of the single most important and beneficial impacts a consumer can make on the environment.

In 2015, 3.4% of people in the United States identified as vegetarian. Today the number of vegetarians is close to 9.7 million. This number is constantly rising - today faster than ever. The number of vegans in the last two years has gone up from just 0.4% to almost 3.5%.

According to an article in The Permanente Journal, the authors found those who eat a plant-based diet have lower rates of obesity, heart disease, high blood pressure, and overall mortality compared to those who do not. This is likely due to the fact that plant-based diets are usually lower in calories.

Protein is essential to the human diet. It helps our bodies grow, repair, and keep moving throughout the day. So how can people be guaranteed they are getting enough protein in their diet without eating meat? Plant-based protein is here to stay and there are a few ways that it benefits not only our health, but also the environment.

Plant-based proteins are derived mainly from plants - obviously. These foods are often made of pulses, tofu, soya, tempeh, seitan, nuts, seeds, certain grains, and sometimes peas. These “pulses” include a large group of plants including chickpeas, lentils, beans, and split peas. Proteins derived from plants tend to be highly nutritious. They not only provide protein, but also other nutrients such as fiber, vitamins, and minerals. Having a plant-based diet can also boost your fiber intake. Nutritional yeast is also a common ingredient. This is a good source of vitamins, minerals, and antioxidants.

Animal cell culture based proteins are produced by in vitro cell culture of animal cells. Instead of from slaughtered animals, using cells would mean killing animals for their protein wouldn’t be required anymore. Simply taking cells from animals and then growing the meat outside of the animal can save many animals’ lives. Cultured meat production uses similar methods as tissue engineering techniques traditionally used for regenerative medicine. This form of protein production is not available on the market yet.

This method does need a bit more testing and experimental research before being perfected, but it is definitely making strides in our environment and culture. This would be a great alternative for people who really like the taste of meat without harming animals.

Fermentation based proteins are the next big thing according to the Good Food Institute (GFI). According to Dr. David Welch of the GFI, in the future we won’t see these three technologies as separate industries. Hopefully they will all work together as one large industry by the time they get into the market. Fermentation can be used to produce ingredients that improve the performance of plant-based products. The industry today relies on mechanical methods such as twin screw extrusion using high pressures and temperatures to restructure protein concentrates and isolates to create textured vegetable proteins. Fermentation could allow for optimizing the flavour and texture of these proteins. Things like the smell of a piece of meat or a burger could be imitated through the process of fermentation.

Mainstream consumers have recently expressed wants to decrease the amount of animal protein that they consume. More so than vegans or vegetarians, people want a healthier and less invasive option of getting their daily needs of protein. A study by Beyond Meat found that 93% of their customers also buy animal based proteins. This just explains how people are wanting more variety and are open to the possibility of changing their daily intake of protein to more sustainable ways.

Some of the drivers for increased demand of plant-based protein include:

Beyond Meat also found that ⅔ of consumers announced reducing consumption of at least one kind of processed animal protein. Although animal alternatives will occur along a spectrum and over time, it is important to notice the inherent changes in society towards plant-based proteins.

Covid-19 is ravaging through meat packing plants and warehouses across the country. With this, the value of US meat producing giants is plummeting. Stay-at-home and quarantine orders forced a decline in production of meat which then contributed to rising prices, higher demand, and panic-buying of the meat that was on the shelves. The requirements forced meat packing and producing plants to shut down, disinfect, and implement social distancing requirements. This means slower production time and a halt in harvesting.

Along with dangers of the meat packing industry, up until recently a lot of consumers have been under the impression that plant-based meats are “hippy food”. Consumers are increasingly realizing that some alternative proteins are healthier and give you just as much protein as animal proteins do. The last objective will be to make these alternatives taste good while also offering all these benefits.

From coronavirus stay-at-home orders along with being able to spend more time in the kitchen, people have been spending more time than ever thinking about what they are putting into their and their family’s bodies. The trend of plant-based eating was already here, but this has seemed to intensify and accelerate the idea. Some studies have shown that plant-based meat purchases surged 178.5% in the month of May. The pandemic has contributed to a slight meat shortage which has opened some people to the possibility of taking on a more balanced, plant-based diet.

Just last year, 25% of millennials claimed that they were vegan or vegetarian.

So What are the Benefits

The benefits of plant-based eating are plenty and easy to come by.

What are Some Drawbacks

There are, however, some risks involved with plant-based eating. Mostly around getting enough protein and possible digestive issues. The plant-based diet is very high in fiber which is essential for gut health and cardiovascular health, but it can also lead to unwanted gas and bloating. Raw vegetables are harder to digest than cooked vegetables. If that is an issue, try cooking everything instead of eating raw vegetables or limit the intake of raw foods. Good alternatives to get your protein in while not eating meat are also beans, legumes, seeds, and eggs.

Vitamin B12 is only found in animal proteins so it is easy to become deficient in this category. It is also important to look at what animal protein includes and make sure to be getting the same amount of that in whatever plant-based foods being consumed. There are some foods such as non-dairy milks and nutritional yeast that include the vitamin B12 supplement.

It is important to note that not all plant-based alternatives are healthier for you. Just because something is vegan or plant-based does not mean they are good for you. Especially products which are highly processed. Try to stick with whole foods and products where you know exactly what goes into them. Steer clear of foods with ingredients that you don’t know or that you can’t pronounce. Most of the time, those are fillers or unnecessary.

There is no need to switch to a fully plant-based diet right away. Now that the benefits are clear, it will be easier for people to gradually take on a more plant filled diet and help the environment as well as their own health.

Here are some startups that are making headway in the alternative protein market. 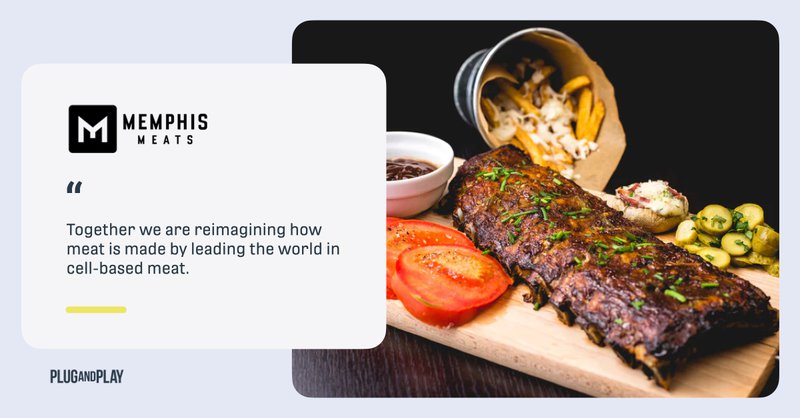 Memphis Meats: Our goal is simple: to change the way meat gets to your plate. We're developing a way to produce real meat from animal cells, without the need to feed, breed and slaughter actual animals. We expect our products to be better for the environment (requiring up to 90% fewer greenhouse gas emissions, land and water than conventionally-produced meat), the animals and public health. And most importantly, they're delicious. Huge companies such as Tyson Foods, Cargill, and SoftBank are investing and backing Memphis Meat’s mission and end goal to feed 10 billion people by 2050 and beyond. 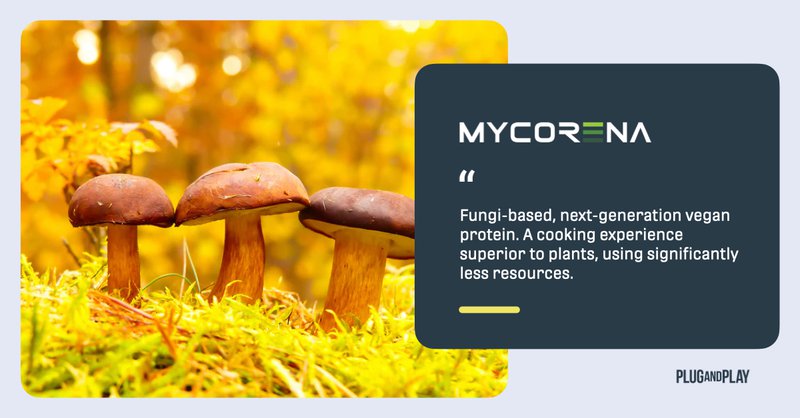 Mycorena: Mycorena created the most innovative and sustainable vegan protein for food, using a proprietary fungi-based process. Our product, Promyc, is a vegan protein ingredient with a neutral taste and a meat-like texture. Promyc has been impressing chefs and culinary enthusiasts and delivers a nutritious content of 60% protein and 12% fiber. All this while having significant lower environmental impact than animal or plant-based alternatives. Promyc is created through a resource-efficient fermentation process. This process offers fast, stable and scalable production that can be fully local. 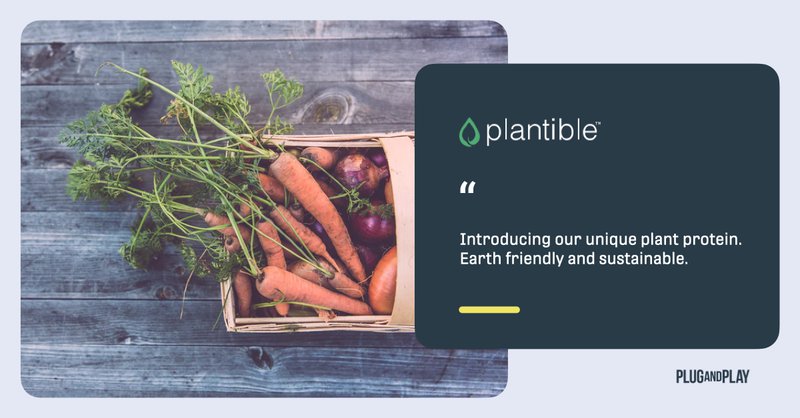 Plantible: At Plantible, we are developing innovative technologies to produce the world’s best and most sustainable plant-based protein. Our ingredient will be all-natural, organic, and free of major allergens. CPG makers will be amazed by our protein's functionality and will prize its neutral taste, odor and color for use in a multitude of formulations. We use scalable processes and environmentally friendly indoor aqua farms to grow lemna. From there, we utilize our proprietary extraction technology to create an organic and complete protein that will be the most sustainably produced plant-based protein in the world. Our processes require no pesticides, hexane, or other toxic chemicals – and we do not require valuable farmland or irrigation to grow our crop!

Plug and Play is a food acceleratorthat matches cutting-edge startups and the largest corporations. Join our platform today.

Addressing the problems and looking towards innovative new ways to feed the world.

Addressing the problems and looking towards innovative new ways to feed the world. 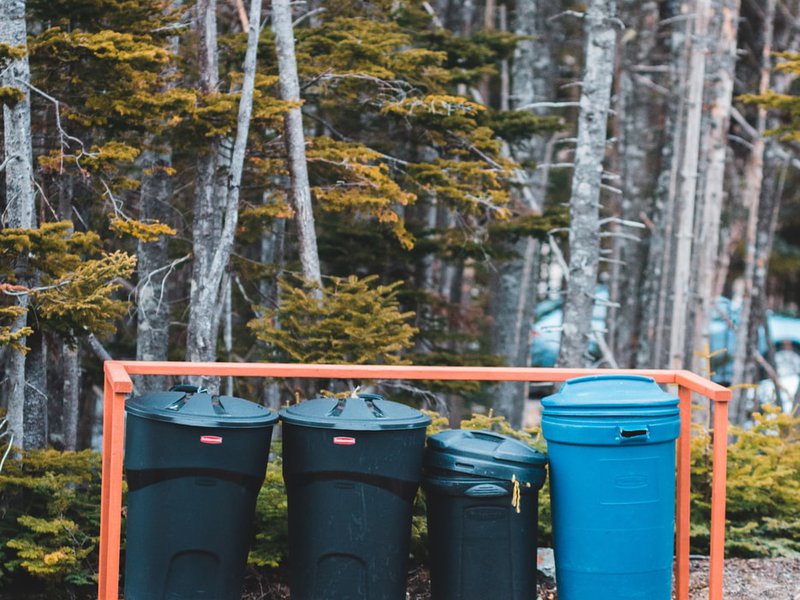 Creating a circular plastic economy is one of the best solutions to plastic pollution. 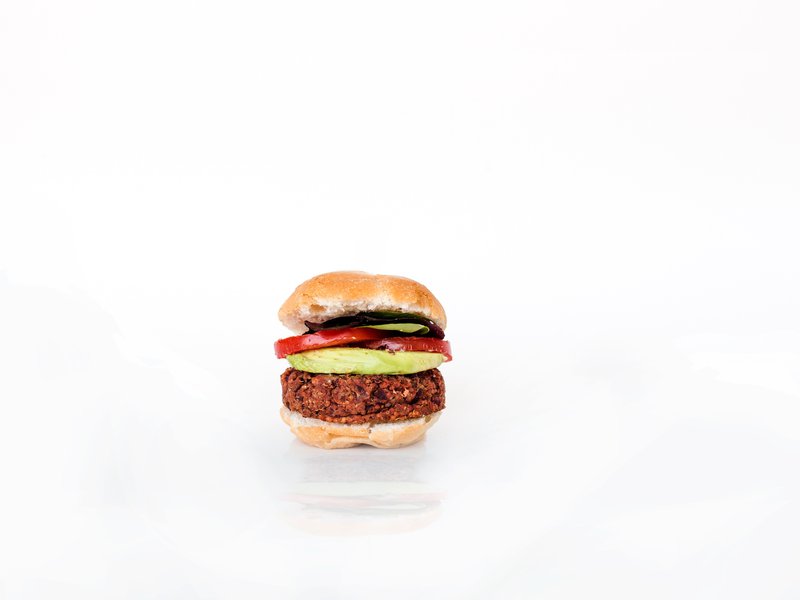 With new technologies and companies forming, now is the perfect time to fully embrace a Clean Meat future. 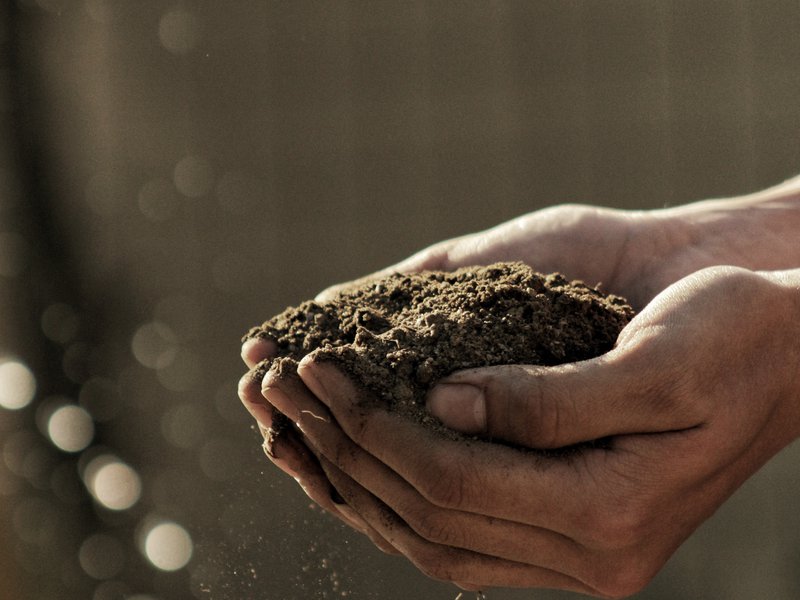 Innovation is more important in modern agriculture than ever before. The industry as a whole is facing huge challenges, from rising costs of supplies, a shortage of labor, and changes in consumer preferences for transparency and sustainability.
Read more stories