In Space Oddity, David Bowie sang the story of Major Tom, an astronaut flying through space. “Am I sitting in a tin can, far above the world. Planet Earth is blue and there's nothing I can do,” he said. Major Tom is just a fictional character, but there are indeed space explorers out there. They're looking out the window of their spaceships at our tiny planet, in the middle of an infinite universe. The human body is not made to survive in space, and neither is our mind. That’s why space trips pose so many challenges for space agencies such as NASA. The obstacles loom larger with a trip to Mars in our future.

For context: NASA plans to send humans to Mars in the 2030s. There are many ways to get to the Red Planet, but NASA’s preferred approach is a mission that would last more than 900 days: 210 days to get to Mars, 496 there, and 210 to get back. If this becomes reality, astronauts will go where no one has gone before. The mental complications of a mission like these are many.

That’s why behavioral health is so important to NASA scientists, and that’s why NASA’s Human Research Program is partnering with the Translational Research Institute for Space Health (TRISH). Together, they’re looking for emerging technologies that can help astronauts stay healthy while in space. In order to do that, TRISH is supporting both high-risk early-stage research, as well as pre-seed and seed-stage health technologies that can be modified and used by space explorers on a trip to Mars.

Why Is The Mental Health Of Astronauts So Important?

“Astronauts are high performing folks, and we want to keep them high performing”, says Jimmy Wu, Senior Biomedical Engineer at TRISH. But this is easier said than done, taking into account that they’ll spend months surrounded by the same crew in a confined spaceship. They will need to adapt to a very challenging environment, where they’ll be isolated, face periods of heavy workloads, be away from friends and family, won’t be able to breathe fresh air or even eat fresh food. They might experience sleep problems, due to the lack of natural light, as well as anxiety problems or depression. There's more; apart from these kinds of problems, factors such as microgravity, radiation or carbon dioxide may also debilitate their neurobehavioral and performance.

“We want to keep astronauts healthy or detect that they are starting to deviate from their baseline, so we can prevent it before it really affects them or the mission itself,” says Wu.

How Is NASA Protecting The Mental Health Of Astronauts?

It is paramount that astronauts remain high-performing at all times. But space is a tough place, with many environmental stressors that complicate things, such as CO2, radiation and noise levels. To give an example, the astronauts on the International Space Station are continuously exposed to an average noise level of 72 dBA (which is approximately the noise equivalent of the traffic on a freeway).

TRISH is collaborating with the University of Pennsylvania, with Mathias Basner, M.D., Ph.D. as main investigator. They are developing a database of information and environmental stressors that will be the basis for machine learning algorithms that predict cognitive performance. With this technology, NASA will be able to predict potential decrements in astronauts’ cognitive performance and behavioral health.

Space medicine and terrestrial medicine are connected. We can adapt existing terrestrial technology so it can be used in space, but we can also adapt space technology so it can be used on Earth. In the case of this particular research, these machine learning algorithms can be translated to several situations on Earth, where humans need to remain high-performing in an adverse environment, such as Navy personnel or submarines.

Empatica Inc. is a MIT spin-off with offices in Boston, Milan and Seoul. They develop software and algorithms to advance understanding of human behavior through wearable sensors. This can be useful for assessing astronauts’ mental health.

Their CEO, Matteo Lai, is leading a research project in collaboration with TRISH. The company is developing a space-ready wearable health monitor that will use traditional wearable consumer electronics development processes. All of this will use state-of-the-art sensors and materials, as well as machine learning technologies. They’re calling this low-power wearable EmbraceX, and it would be capable of sensing, among other things, electrodermal activity, heart rate or oxygen saturation.

Both sleep duration and sleep quality can be reduced in spaceflight. There are many factors that affect astronauts’ sleeping patterns: the lack of natural light, noise, disturbances caused by other crew members… Astronauts usually sleep in sleeping bags located in small crew cabins. They need to attach themselves so they don’t float around the cabin.

As you can imagine, these aren’t the best conditions to get a good night’s sleep. Astronauts need to be ready to respond effectively to emergency events, as well as maintain high-performing cognitive functioning. And they can’t do so if they don’t get enough sleep. Medication isn’t always a good solution, since it compromises the astronaut’s performance in the case of an unexpected situation.

In order to help with this situation, TRISH is collaborating with the University of Pennsylvania, with David Dinges, Ph.D. leading the investigation, to develop a wearable that would improve sleeping patterns. This wearable, called SmartSleep, consists of a headband and an app. The headband would be worn by astronauts while they sleep and emit inaudible slow waves as a way to improve sleep quality, benefit cognitive performance during sleep restriction and decrease the severity and duration of “sleep inertia” after abrupt awakening.

Dr. Dinges is now testing this device and the impact of the slow waves, that have been proven to improve cognitive performance in previous studies.

Z3VR is a digital therapeutics company based in Houston, Texas, that builds virtual reality experiences to treat chronic diseases. And they are one of the entities working with TRISH to find ways to keep astronauts mentally healthy in space.

Josh Ruben, Co-Founder of Z3VR, is the main investigator of what they’ve called Project Atlas. They’re developing a space-suitable virtual reality game that can improve physical fitness and mental well-being of astronauts. It will have an “exercise mode”, that will use real-time heart and respiration rates to modify the intensity of the training. It will also have a meditation mode that uses biometric data of the astronauts to achieve an optimal heart rate by modifying the user’s environment.

A Laser To Improve Astronauts’ Performance

Having a laser pointing at your forehead isn’t anyone’s idea of fun, but it seems it could help astronauts! How, you ask? Light in the near-infrared range has been shown to stimulate vascular and metabolic function in specific cells.  Jacek Dmochowski, Ph.D., from the City College of New York, is collaborating with TRISH to develop a new technique to enhance astronauts’ brain function by applying safe levels of laser light to their forehead.

Dr. Dmochowski’s study wants to prove that this laser light can increase the energy available to neurons, thus improving attention and working memory. This research could lead to a non-pharmacological technique for boosting the performance of the brain. How cool is that?

Space irradiation is one of the main risks for astronauts, as we already mentioned in our article about the main space health challenges. In the course of a prolonged space trip (such as the trip to Mars), radiation exposure is almost unavoidable. Galactic cosmic rays come from exploding stars called supernovae and are dangerous for humans in many ways. Among other problems, they increase our lifetime risk of cancer and can cause radiation sickness.

Nowadays, there is no therapy that can reverse the effects of cognitive dysfunction caused by exposure to radiation. TRISH has partnered with the University of Arkansas at Little Rock, with Antiño Allen, Ph.D. as principal investigator, to address this problem. Together, they want to “identify specific components of the central nervous system that are most vulnerable to radiation injury, as well as investigate the space-relevant dose-response parameters for photobiomodulation as radiation countermeasures”.

As more companies develop new tech to address mental health and performance, we will be able to adapt and personalize treatment. TRISH is supporting innovation on that cutting edge, hoping to send new tech to space. The Institute is seeking and funding companies who can offer new ways to guard the mind in space. Proposals for funding are due June 26, 2020.

Funding from TRISH offers unique benefits for medical and technology companies. The funding is non-dilutive capital, meaning no shares of the company or IP is lost. Investigators access subject matter experts like NASA personnel. And with product validation for space flight, the final product is often made more suitable for Earth-based markets.

If you have a tech that can protect astronaut mental health and performance, check out the TRISH solicitation. Maybe your tech will end up on Mars! 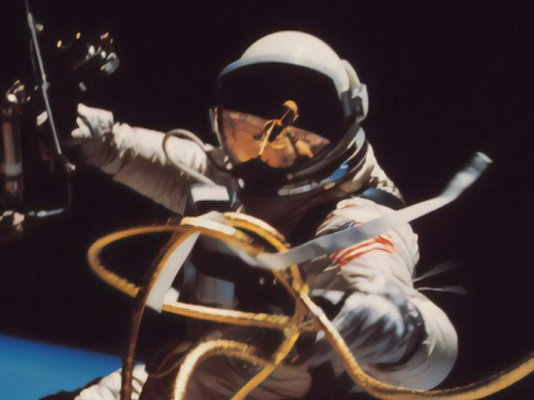 Space deeply affects our health. Find out the many different ways space affects astronauts' health, and how NASA is preparing to travel to Mars.
Read more stories