Special Purpose Acquisition Companies (SPACs), also sometimes called “blank-check” companies, are shell companies created with the sole intent to raise capital and buy a private organization or a stake in a company. SPACs allow a private company to become a publicly-traded company with more certainty as to pricing and control over deal terms as compared to traditional initial public offerings (IPO), without going through the traditional IPO process. Read on to learn more about how SPACs work.

Last year, Virgin Galactic, DraftKings, Opendoor and Nikola Motor Co. all went public by merging with SPACs. In fact, roughly 240 SPACs went public in 2020, raising about $80 billion in total funding, nearly as much as all of last year’s IPOs combined, according to Renaissance Capital. 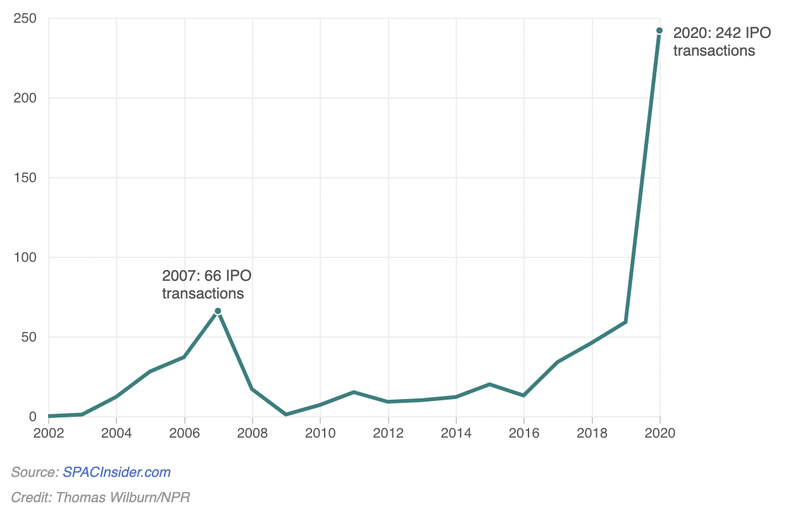 According to NPR, today's SPACs are descended from the "blank-check corporations'' of the 1980s. After being used as part of many fraudulent investment schemes in the 1980s, these companies were regulated by the Penny Stock Reform Act of 1990 and SEC Rule 419. Creative lawyers developed the SPAC as a way to work around the new regulations without defeating the regulations' purpose of investor protection. For instance, if an investor doesn’t approve of the company a SPAC sponsor chooses to merge with, the investor can exit the SPAC with interest.

SPACs had a brief moment of popularity in 2007 prior to the financial crisis, but by 2009 they had lost traction—that year, only one SPAC IPO was successful. However, in the last few years, SPACs have picked up momentum again. VC Chamath Palihapitiya's SPAC Social Capital Hedosophia Holdings bought a 49% stake in Virgin Galactic for $800 million before listing the company in 2019. In 2020, Bill Ackman, founder of Pershing Square Capital Management, sponsored his own SPAC, Pershing Square Tontine Holdings, the largest-ever SPAC, raising $4 billion in its offering.

Butterfly Network and DNA-testing startup 23andMe are reportedly in talks to go public through a SPAC in 2021. There are also rumors that digital media companies like BuzzFeed, Vice Media, and Bustle Media Group could use SPACs to finally pay out investors.

How do SPACs work?

Usually, a SPAC is created, or sponsored, by a team of institutional investors from the world of private equity or hedge funds because when a SPAC raises money, the people buying into the IPO do not know what the eventual acquisition company will be. Institutional investors with successful track records, industry knowledge, and relevant expertise can more easily convince people to invest in the unknown.

In an IPO, a company announces it wants to go public, then discloses extensive details about its business operations. Afterward, investors put money into the company in exchange for shares. A SPAC flips the process around. Investors pool their money together first, with no idea what company they will be investing in. The SPAC goes public as a shell company. The required disclosures are easier than those for a regular IPO, because they have no operations to describe. This approach offers several distinct advantages over a traditional IPO, such as providing companies access to capital, even when market volatility and other conditions limit liquidity. SPACs could also potentially lower transaction fees as well as expedite the timeline to become a public company. According to the SEC, normally, SPACs acquire or merge with a private company many months or more than a year after completing its own IPO.

According to PwC, the merger of a SPAC with a target company presents several challenges, including having to meet an accelerated public company readiness timeline as well as complex accounting and financial reporting/registration requirements that may differ based upon the lifecycle of the SPAC involved. The target company’s management team has to focus on being ready to operate as a public company within three to five months of signing a letter of intent. ClearThink Capital explains that although there have been a number of exceptions, a SPAC is best used to make a single platform business combination followed by other business combinations. Whenever multiple companies are simultaneously or nearly simultaneously acquired, the level of complexity and the difficulty of valuation increases exponentially. Although extremely rare, a SPAC can be used to acquire multiple companies followed by a roll up. An example is GigCapital2 Inc merger with UpHealth Holdings Inc and Cloudbreak Health LLC. 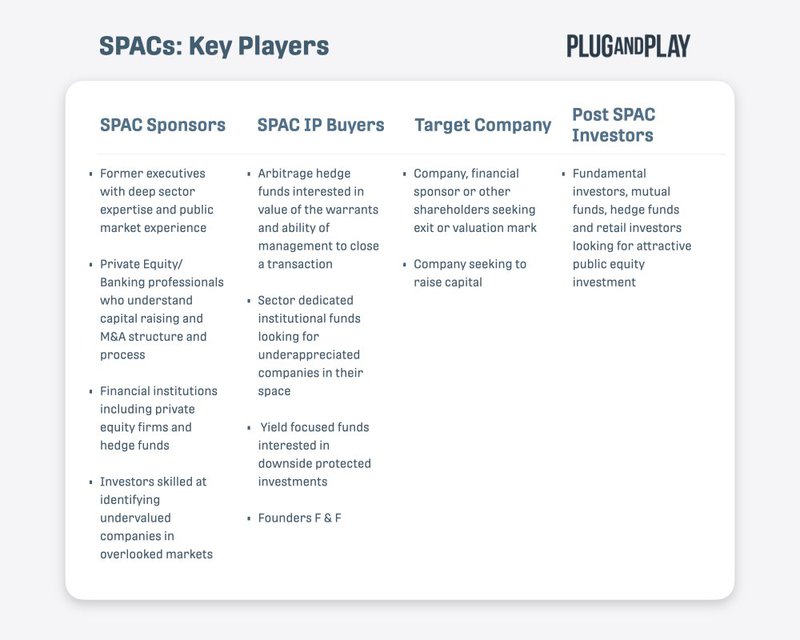 The sponsors will purchase founders’ shares to ensure that they maintain 20% of the equity post-IPO. The remaining 80% interest is held by public shareholders through “units” offered in an IPO of the SPAC’s shares. Each unit consists of a share of common stock and a fraction of a warrant (a security that entitles the holder to buy more stock of the issuing company at a fixed price at a later date).

As CNC reports, generally the money SPACs raise in an IPO is placed in an interest-bearing trust account. These funds can only be used to complete an acquisition, within a time frame of two years to complete a deal. If the SPAC does not complete a merger within those two years, the SPAC liquidates and the IPO proceeds are returned to the public shareholders.

Once a target company is identified and a merger is announced, the SPAC’s public shareholders may alternatively vote against the transaction and elect to redeem their shares. If the SPAC requires additional funds to complete a merger, the SPAC may issue debt or issue additional shares, such as a private investment in public equity (PIPE) deal. 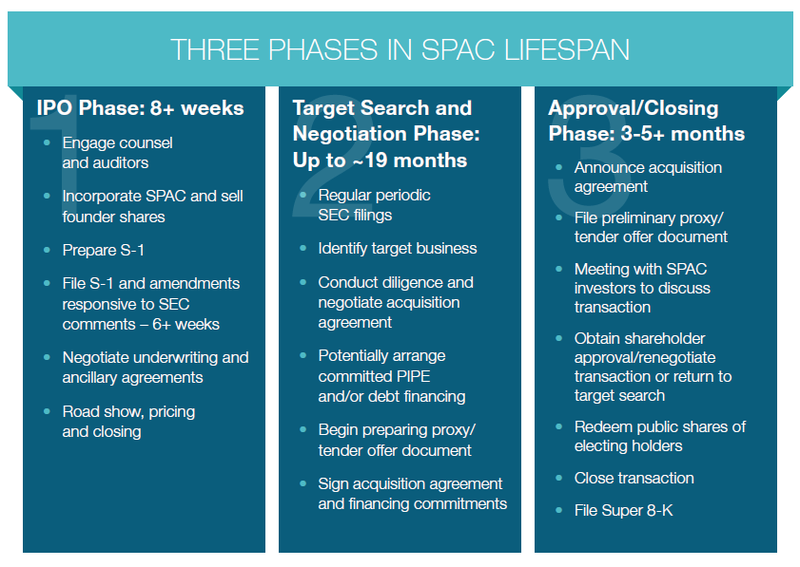 The three phases in SPAC lifespan according to Harvard Law. Source.

This is the key element of how SPACs work. The SPAC will need to solicit shareholder approval for a merger and will prepare and file a proxy statement. This document will include a description of the proposed merger and governance matters as well as financial information of the target company, such as historical financial statements, management’s discussion and analysis (MD&A), and pro-forma financial statements showing the effect of the merger.

SPACs in the US have only tended to search for national targets – but the recent announcement that UK electric vehicle maker Arrival Group will merge with Nasdaq-listed CIIG is the sign of a new wave of SPACs looking at European acquisition targets in the coming years. Although Martin Franklin-led group launched London's first blank cheque IPO of 2020, so far in Europe the SPAC market is yet to take off.

Once shareholders approve the SPAC merger and all regulatory matters have been cleared, the merger will close and the target company becomes a public entity. A Super 8-K must be filled with the SEC within four business days of closing. This Super 8-K contains information equivalent to what would be required in a Form 10 filing of the target company.

At the combination, SPACs dissolve into their individual shareholders, and the company’s stock weaves into the new company. For example, after Luminar Technologies (target company) merged with Gores Metropoulos stock (SPAC), the combined stock started trading under the ticker symbol “LAZR” on the Nasdaq exchange.

SPACs are gaining popularity for a number of reasons: 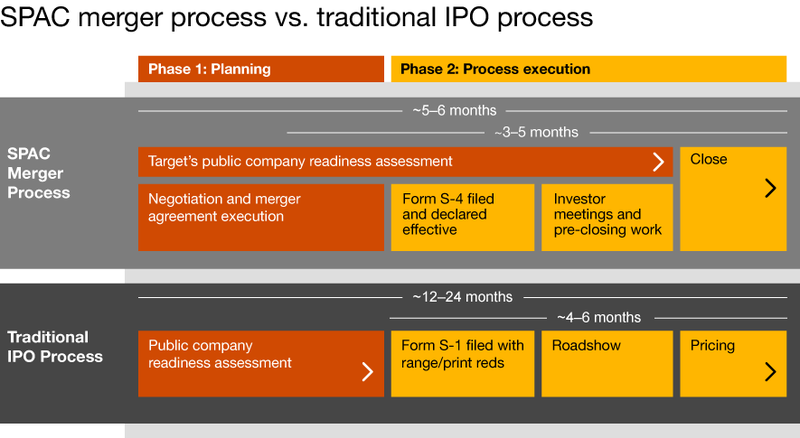 SPACs continue to gain in popularity as an exit option for many late-stage startup companies, for reasons like the speed to market, greater certainty, and access to liquidity and talented management, but it is unlikely SPACs will overtake IPOs or direct listings in the long term. While some high-profile SPACs have performed well, advisory firm Renaissance Capital found that the average returns from SPAC mergers completed between 2015 and 2020 fell short.

As one of the most active VCs in Silicon Valley, our goal is to fund the teams that are building the defensible businesses of the future. By leveraging our capital, our network of VCs, and our corporate partners, we give our portfolio companies an unfair advantage. Join our ecosystem today. 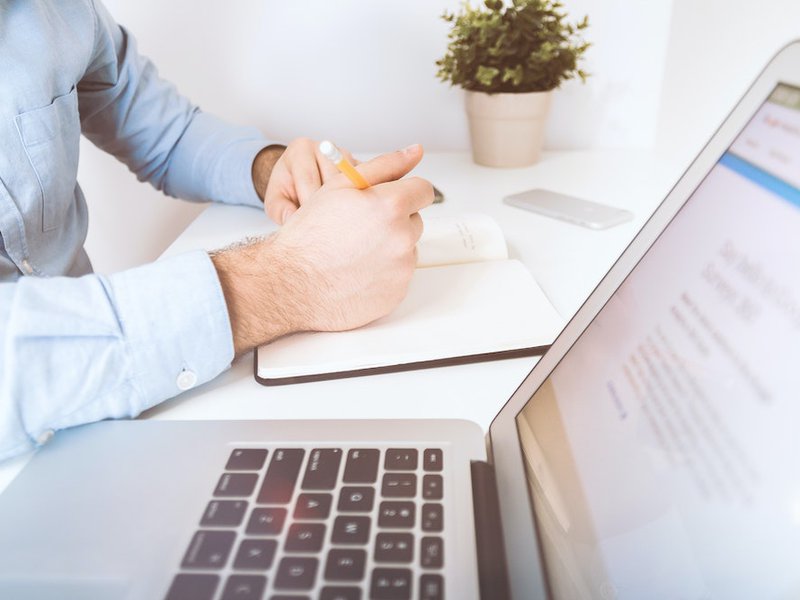 When both the B2C and the large enterprise B2B markets have become saturated, many entrepreneurs start to pursue the colossal opportunities in the underserved SME market by fulfilling the unmet demand from SMEs. 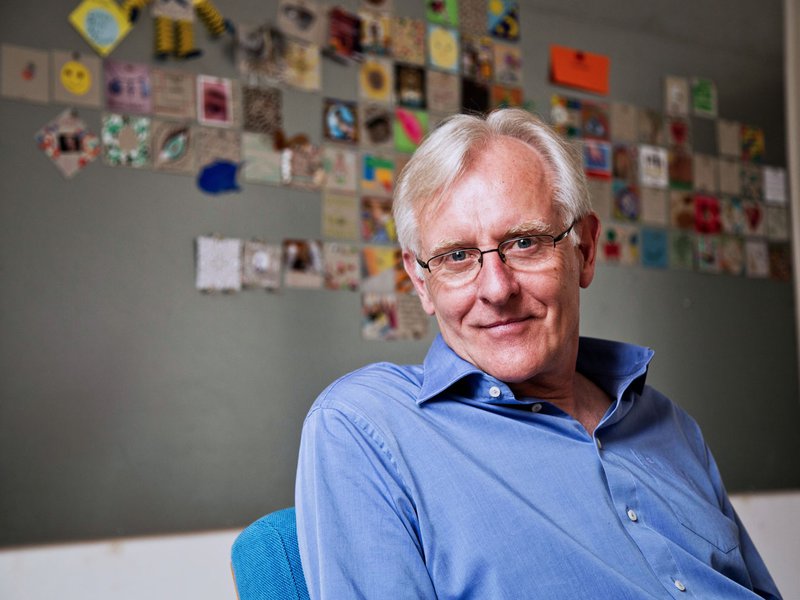