What factors influence the rate of uptake?

The most successful original application of blockchain was cryptocurrencies and the related ecosystems. Today, however, the vast majority of them exist only as a hybrid form of speculation and gambling, operating on the edges of or outside of financial regulation, and counter to the original manifesto, have already become highly centralized.

One downside of this early boom was the distortion of expectations and a subsequent vastly inflated hype cycle and valuation of all things blockchain.

In the real world, a significant factor in blockchain implementation is the lack of open source or easy ‘plug and play’ accessibility. It’s a complex and specialist area of software engineering and a significant barrier to entry. If there were a Microsoft Office blockchain option to develop systems with, it would be a very different story.

It also could be argued there are fundamental incompatibilities with blockchain and capitalism. Blockchain is all about decentralization, capitalism likes centralization. It’s a natural outcome of it and every commercial enterprise ultimately resides at the center of its own sphere of active influence.

According to a 2018 study by PwC, the biggest barriers to blockchain adoption are regulatory uncertainty and lack of trust. The full table with their findings is shown below. 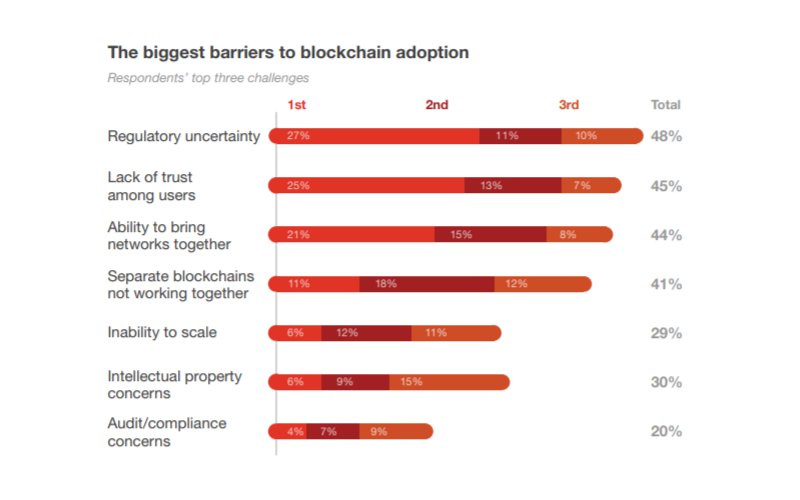 PwC offers four strategies for blockchain success. Some are solid advice, others fall deeply into the valley of ‘easier said than done’.

Strategy One: When considering blockchain implementation, think in terms of evolution rather than revolution.

That makes sense. It’s important to be open to changing methodologies and processes, there’s little advantage to simply transferring old ways of doing something onto a new technology. Allow the capabilities of the technology to define the project.

Strategy Two:  “Build an industry ecosystem...Blockchain may call for competitors to collaborate in a new way, as they come together to solve industry-wide problems.”

Build an industry ecosystem? That’s about as big a brief as anyone could give. Odds on what they’re referring to here is the IBM / Maersk shipping logistics platform, which is predictably struggling because it requires the cooperation of dozens of competing businesses. Why would a competitor of Maersk want to run its operation through a platform of which Maersk half own and operate? They don’t. And therein is the problem.

Build an industry-wide platform? This strategy is the opposite of what seems to work in real life, that being start small, manageable, controllable. Forget building ecosystems for entire industries. Start with what’s achievable.

Many companies are trying to build too big, IBM / Maersk included. Other notable ‘too big not to fail’ attempts include R3, building enterprise blockchain for a consortium of financial services companies, (ecosystem again) and despite raising over $100M are running very quickly into challenges including significant consortium dropouts and worrying cash burn. Organizationally, consortiums are difficult even with a handful of players. R3 have 70+ and falling. Bringing a consortium together is hard, but not as hard as actually developing viable business services for them.

There’s an inherent need for a compelling business case for the adoption of an emerging technology to take off. It’s often easy to say what won’t work rather than what will, as anyone involved in Brexit will affirm.

Barriers to adoption include over-ambitious projects, excessive numbers of participants being theoretically required or actually acquired, seismic shifts in attitude and thinking being needed for implementation - including expecting entrenched competitors to start collaborating - and a generally inorganic and overfunded approach to business.

If startups have taught the business world anything, it’s a lean and dynamic approach. Do one thing brilliantly, be focused and get one thing right. Start small, iterate, evolve, flow like water, grow like a virus.

We’ll take a punt and say this: some companies will adopt meaningful blockchain solutions in the right places at the right time within their own operational frameworks. These solutions will give those companies a marginal advantage, and confidence in blockchain. They will then go on to implement additional blockchain solutions, again, and again, like pieces within the jigsaw, resulting in an extremely efficient and cohesive enterprise. A kind of ‘Smart Business’. This will give them a continuous competitive advantage, which other existing companies will be hard pressed to answer.

In addition, by this point, disruptive startups will emerge using the same ‘end to end’ blockchain processes in those same and similar industries. They will also have a certain edge over the traditional companies, being also ‘codified to succeed’. At this point, the gradual implementation of blockchain into certain commercial ecosystems will have become a clear differentiator for who makes it through to the next round.

As David Dawson, CTO of Cygnetise, describes it: “Blockchain is a “new” technology that has been around for a while. Like any new technology, it has its strengths and its challenges, and playing to these strengths and using it to complement existing technology rather than treating it as a silver bullet is key in making it mainstream.”

At Plug and Play, we boost innovation by matching corporations and cutting-edge startups. Our Fintech accelerator is already working with some of the most exciting companies in the world. 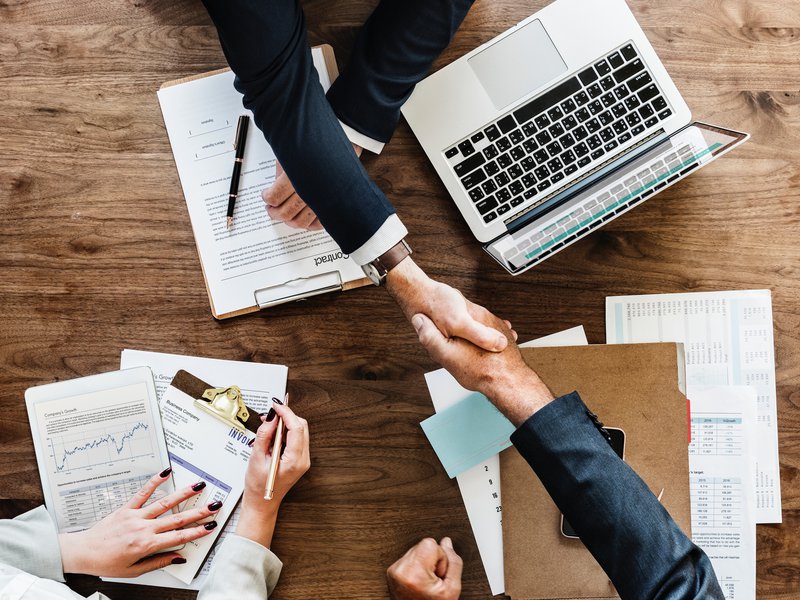 Blockchain will transform the banking industry as we know it, providing greater efficiency and accuracy in financial services.